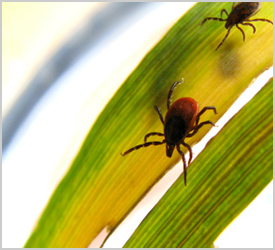 Dr. Green treated her first case of Lyme disease in 1989. Since then she has closely followed Lyme and chronic infectious disease via patient care, diagnosis, treatment, and ongoing research of Lyme Disease.

The treatment of Lyme disease, should in most cases be re-phrased as the treatment of tick borne disease. I follow the ILADS standard of care in treating tick borne disease. In addition I will treat the underlying or co-existing illnesses using evidence based therapies. I use the term evidence based to indicate that there is scientific research that provides data on what therapies to apply.

The earlier in the course of tick borne disease, that the treatment is started, the better for the patient, and the worse for the microbes.

Early detection, however, can be difficult. Lyme IS the most prevalent tick borne disease in the states and it is increasing in incidence year to year. Yet the Center for Disease Control estimates only 10% of the cases of Lyme disease are reported annually. This is because only 50% to 68% of patients have a clear bulls-eye (erythema migrans ) rash. Only 26% ever see the tick that gives them Lyme disease. Most people do not know that a flu in the late spring, summer or early fall can be a sign of Lyme disease. Most doctors do not know that Lyme exists anywhere but the northeast part of the United States. So early treatment is a challenge. I try during tick season in Northern California (about April to July depending on weather) to have short appointments to check out a tick bite or erythema migrans rash, in order to effect early treatment.

Late, chronic, or missed Lyme disease is a different entity than early Lyme disease or treatment of a tickbite. In my opinion chronic Lyme disease is never due to the Lyme bacteria alone (Borrelia burgdorferi, afzelis, garnirii, japonica and on). There are other tick borne diseases and other opportunistic or commensual microbes that join the smart Lyme bacteria in infection. We have evidence that Babesia and Ehrlichia co-infection with Lyme worsen the clinical picture and make it harder to effectively treat Lyme disease. We have evidence of chlamydia, bartonella, mycoplasma, toxoplasmosis and many more microbes causing illness along with the Lyme bacteria. We have evidence that microbes can “talk” with each other in the biofilms of our body. We have overlap between chronic fatigue syndrome, which is often caused by a chronic viral infection, and Lyme disease. I look for these other microbes: I do not test for every microbe in every patient. The history and the exam will suggest which microbes are infecting the patient.

Unfortunately in late Lyme, antibiotics alone are often not sufficient. Some patients are genetically or epigenetically predisposed to chronic Lyme disease. Often the underlying conditions must be addressed along with the infection.

Borrelia burgdorferi has been called the second great pretender, after syphilis. Like syphilis it is a spirochete (looks like a spring under the microscope), and the spirochete goes to the brain and spinal cord as fast as it can get there. In addition like syphilis it grows very slowly. Unlike syphilis it is relatively smart in the bacterial world, having the largest genome of any other bacteria. Borrelia burgdorferi is able to crawl inside of cells, thus avoiding immune detection, hide in the brain and spinal cord, where our immune system is careful not to cause too much inflammation(so it won’t always see or attack the Lyme bug there). More recent data suggests it may, like many of its co – infecting microbes be able to fool the immune system and manipulate the immune response so that the immune system thinks that there is not an infection. In 3 animal models; dog, mouse and monkey, chronic persistent infectious borrelia infection (Lyme disease ) has been proven after short course antibiotic.(1-3 months) This provides evidence that the cure of chronic Lyme disease in many patients will take more than 1-3 months of antibiotics.

Lyme is a spirochetal disease. This means there can be a Jarrisch-Herxheimer reaction. This is sometimes called a herx, or flare. This reaction further complicates Lyme treatment. In one case a patient with Amyothrophic Lateral sclerosis (ALS) with concomitant Lyme disease was cured of both disease with intravenous antibiotic therapy. In diseases in which nerve cells may be directly infected with a microbe, application of antibiotics may yield a “herx” that causes further death in those neurons. So again treatment of patients with overlapping neurological disease requires full knowledge of pathophysiology of infection, herxheimer reactions and immune response to death of microbes in various tissues. I modify treatment according to the clinical presentation of the infection.

The treatment of any chronic infectious illness involves awareness of many body systems. Almost by definition a chronic infectious illness is going to spread around the body affecting other organs and hormone glands, weaken the overall health and ability of the patient to fight. Perhaps the infectious agent will even manage to integrate its microbial self into the host (the patient or you) in such a way that it becomes a part of the body. Treatment of Lyme involves chasing that bacteria to all of its nooks and crannies in the body, recognizing it by laboratory testing and physical exam and supporting the patient in immune and hormonal health during treatment.

The last 2 years Oliver could barely get out of bed… this year he is one of 2 lead pitchers for the freshman team. Thank you for all you do to get us back to health. Although we still have a ways to go in his treatment, I am so grateful he is able to achieve one of his goals in life… to play high school baseball. Thank you!

Dr. Christine Green helped me so much with both the diagnosis and treatment for Lyme Disease. I found her to be a great listener and compassionate.